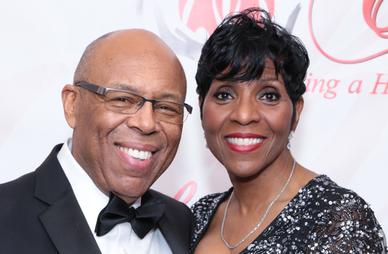 Edward & Shirley Calahan are entrepreneurs, philanthropists, and communicators who have spent their lives serving the Chicagoland community.

With humbling beginnings, Edward Calahan had a dream and a vision of owning his own funeral business. After obtaining a degree in Mortuary Science from Worsham College in Wheeling, IL, Mr. Calahan established the Calahan Funeral Home in 1983 located at 7030 S. Halsted, Chicago, IL.  In just a few years, Shirley being an administrator and banker joined the family-owned and obtained her degree from Worsham College as well.  Since their inception, the Calahan Funeral Home has made its mark providing exceptional service for funeral arrangements, “pre-need” planning, bereavement etiquette, funeral education, and large, high-profile funerals.  Over the years, the Calahan's have created over 400 jobs and mentored more than 250 mortuary science students and Entre-Morticians interested in the funeral business.

In addition to their philanthropic work, the Calahan's are also one of Chicago’s trusted voices on marriage and keynote speakers on business.  They are the proud parents of Edward (Dominique), Keshia,  Edric, and Valerie (Jasper) and the proud grandparents of Edward, Abby, Jasmine, Jayla and Jasper II.